Whilst Croydon & District Motor Club is primarily a rally club other events are organised which are classified as ‘off road’. To give you more of an insight into the different forms of motorsport organised by Croydon & District Motor Club and governed by the Royal Automobile Club Motor Sports Association Limited (Motor Sports Association) a brief resume follows.

Most car rallies follow the same format. Competitors are required to follow the correct route and visit a control, or controls, at a set time. Rallies either take place on the public road, known as road rallies, or on private land where they are generally known as Special Stage Rallies.

Road rallying used to form the basis of most motor clubs activities but with the increasing popularity of Special Stage rallies since the 1970’s the number of road rallies has diminished particularly in the South East. However in other parts of the country, notably Wales, road rallies are still organised with full entries of 90 cars.

Road rallies are run to a set route with set timing. The navigation is handed out on route cards, either at the start or at intermediate controls, and the route is followed using Ordinance Survey maps. Navigation is usually varied and utilises such forms as map references, spot heights, grid lines, tulip diagrams for junctions and various combinations and derivatives of these. The Competitors are timed at various points along the route to ensure that they keep to the time schedule. Often secret checks, either manned or un-manned, are positioned on the road to ensure compliance of the route. Timing at controls is to BBC time but the timing between controls should not exceed 30mph.

Croydon & District organise 12 car rallies during the winter months. Events using the public highway need not be authorised if 12 or less cars take part. These types of events which takes place on a Friday evening are very popular and special classes are incorporated for beginners and novices.

The club also run Navigational Scatters – another form of 12 car event. These have no set route as such but competitors are required to answer clues at various pre determined points, but have to arrive at the finish at a set time.

Treasure Hunts are also organised by the club. These are family orientated events which take place on a Sunday where competitors are given a set route where they are required to answer certain clues, both written and photographic, and report back to the finish by a set time.

In May this year the club will be running the ‘Three Counties Tour’ a special rally for historic cars taking place on public roads with an interesting route containing passage controls and overall timing.

This type of rally follows a set route and time schedule on the public road but utilises special stages on private land where cars are timed to the second, or tenth of a second, on both surfaced and unsurfaced roads and tracks. Typically Forestry Commission land is used as well as disused airfields, farm tracks and where there is a Road Closure Order, closed public roads.

Croydon & District Motor Club jointly organise the first round of the MSA Gravel Rally Championship, Rallye Sunseeker, which is based in Bournemouth and uses both Forestry Commission and private Estate roads in and around Ringwood and Wareham as Special Stages. The rally always takes place on the last week-end in February each year and attracts competitors from all over the British Isles and is followed by many thousands of spectators.

Off the Road Events

The club organises two Production Car Trials each year as well as a Grass Autotest. Both events are run on private land and as they do not use the public highway the minimum age for competitors is 14. Also cars taking part do not need to be road registered.

These events contain a number of observed sections which take place on smooth grass slopes, where competitors have to traverse uphill sections defined by markers without stopping. The maximum penalty is 12 marks and ‘cleaning’ the section incurs no penalty.

This event takes place on a grass surface and requires competitors to perform a series of different tests against the clock by following a set route around and in ‘garages’ and ‘gates’ without touching the markers. Both forward and reverse motion is required and usually two attempts are allowed at each test with the best time to count. 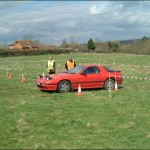 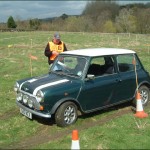 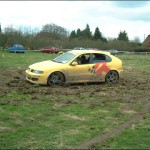